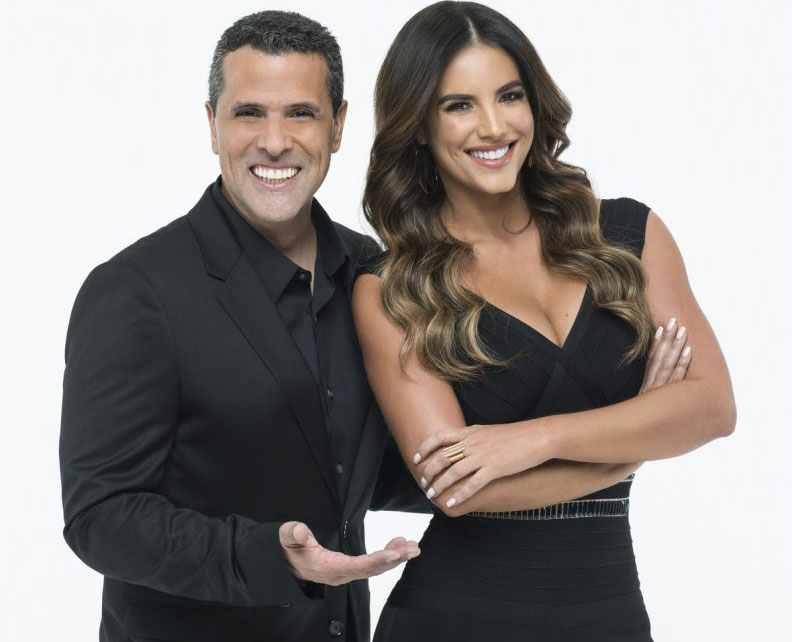 Miami, FL – March 26, 2018 – Telemundo announced today the official hosts of the 2018 Billboard Latin Music Awards. Actress, TV host and Influencer,Gaby Espino returns to host the coveted awards ceremony for a third time, and she will be joined by popular TV host, public speaker and activist Marco Antonio Regil. The most prestigious awards show in the Latin music world is celebrating 20 years of uninterrupted broadcast on Telemundo, and for the third time in its history the public will be able to attend; tickets to the Billboard Latin Music Awards are now on sale at AXS.com, the Mandalay Bay Resort & Casino box offices or by calling (702) 632-7777. The grand event will broadcast live on Telemundo Thursday, April 26 at 8pm/7c from the Mandalay Bay Events Center in Las Vegas, Nevada. The show will also air simultaneously on Spanish-language entertainment cable network, Universo. The complete list of finalists, in addition to exclusive content about this year’s three-hour ceremony, can be found at PremiosBillboard.com, the official website of the 2018 Billboard Latin Music Awards. Fans can be part of the action of the star-studded event following @LatinBillboards across Instagram, Facebook, Twitter and Snapchat as TeamTelemundo, and join the conversation using #Billboards2018.

Actress, TV host, entrepreneur and one of the Latina personalities with more engagement and presence in the social media landscape, Gaby Espino, has become a renowned name in the Latin American entertainment industry. In 2015, she was the main host of the “Billboard Latin Music Awards,” the most watched telecast in the awards history; she returned to host the ceremony in 2016. Gaby was also the host of “Premios Tu Mundo” from 2011 to 2014. Espino recently participated in the third and fourth season of Telemundo’s Super Series “Señora Acero,” and has previously garnered acclaim as the lead actress in Telemundo’s successful telenovela “Santa Diabla” in 2013, among many other productions. In 2015, Gaby launched her lipstick brand Gaby Espino Lipsticks, and in addition, with the desire of being even closer to her audience, she also launched her website www.GabyEspino.com and YouTube channel GabyEspinoTV, which have since achieved an established fan-base of more than 19 million people who actively engage and are extremely loyal to her content, empowering messages, best kept secrets, tips, and who find her lifestyle aspirational.

Leading TV host and voice-over actor Marco Antonio Regil was voted by Readers Digest Mexico’s most Trustworthy TV Host in 2010, 2014 and 2017. Celebrating a successful 33-year career, Marco Antonio has been Mexico’s #1 TV host and has participated as a voice-over actor for Hollywood blockbuster animated movies. As a motivator and public speaker, Marco shares a vision of a more conscious and compassionate world. A tireless animal rights advocate, Regil has served as spokesperson for PETA, Humane Society International, Greenpeace and Animal Heroes, among others. He has visited the United States Congress several times to support initiatives and projects that have become law in the United States. With more than three million social media followers, Marco’s influence extends far beyond his large community of fans. His content is often shared and goes viral among Spanish speakers throughout the world.

The Billboard Latin Music Awards are the only ones to honor the most popular albums, songs and performers in Latin music, as determined by the actual sales, streaming, radio airplay and social data that informs Billboard’s weekly charts during a one-year period from the rankings dated February 4, 2017 through this year’s January 27 charts. Based on album sales, digital track sales, streaming data and monitored radio airplay provided by Nielsen Music and social media data provided by Next Big Sound, Billboard’s rankings are the world’s most authoritative music charts. Finalists, and the eventual winners, reflect performance of new recordings on Billboard’s albums and songs charts, including Top Latin Albums, Hot Latin Songs, Latin Airplay, Latin Streaming Songs and Latin Digital Songs, among others.
The awards are the culmination of the Billboard Latin Music Conference, which will take place on April 23-26th at The Venetian in Las Vegas, Nevada. Now in its 29th year, the conference is the biggest and longest-running event dedicated to Latin music in the world. The conference is the “must-attend” event for the top power players in the industry including A-list talent and top agents, managers, promoters, marketing, advertising, and radio executives, as well as for those taking their first steps in the business. For information please visit www.BillboardLatinConference.com or emailconferences@billboard.com

BILLBOARD AND TELEMUNDO TO HONOR MANÁ AT THE 2018 BILLBOARD LATIN MUSIC AWARDS LIVE ON APRIL 26 AT 7PM/6C
April 3, 2018
Tweets