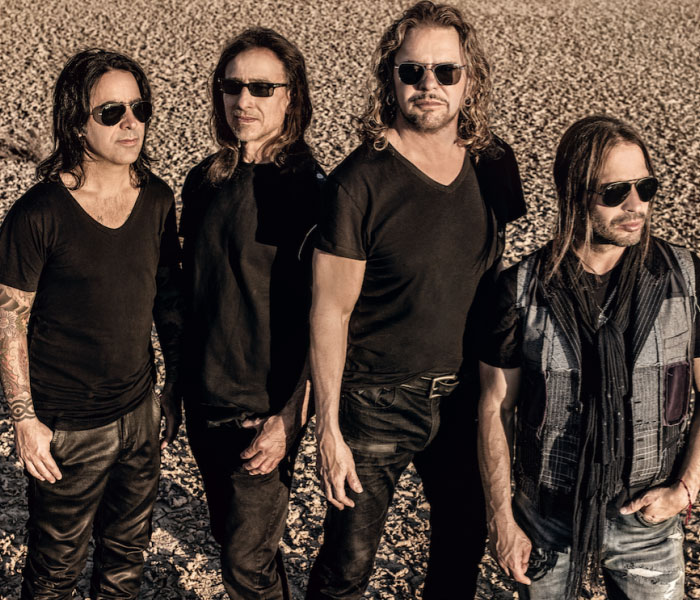 Miami, FL – April 3, 2018 -Billboard and Telemundo will recognize the outstanding career of the most successful Latin music rock band of all time, Maná, when they bestow the group with the Billboard Lifetime Achievement Award at the 2018 Billboard Latin Music Awards. The iconic rock band will also perform at the awards ceremony, which will broadcast live on Telemundo, Thursday, April 26 at 7pm/6c, starting with the arrival of the stars on the red carpet at the Mandalay Bay Events Center in Las Vegas, Nevada. The show will also air simultaneously on Spanish-language entertainment cable network, Universo. Tickets to the Billboard Latin Music Awards are now on sale at AXS.com, Mandalay Bay Resort and Casino box offices or by calling (702) 632-7777.

Although the Billboard Latin Music Awards are given out based solely on chart performance, every year Billboard, together with Telemundo, also bestows its Billboard Lifetime Achievement Award to an artist with an enduring and exceptional career, who has expanded the reach of Latin music, whose contributions go beyond music and whose influence has had a major impact on Latin music worldwide. Past recipients of the Lifetime Achievement Award include Carlos Santana, Jose Jose and Marco Antonio Solis.

From the moment in 1987 when Maná launched its first album as part of a successful movement in Mexico at that time called “Rock en tu idioma” (Rock in Your Language), the trailblazing group achieved unsurpassed success worldwide. During their brilliant musical career that spans over 30 years, the group has charted a total of 32 songs on the Billboard Hot Latin Songs chart, 10 of which topped the list with hits such as “Labios Compartidos” and “Lluvia Al Corazón,” which spent eight consecutive weeks at No. 1. Maná also scored 15 entries on the Top Latin Albums chart, eight of which went to No.1, including “Drama y Luz,” which debuted at the top in 2011 and reigned for nine non-consecutive weeks. Mana’s latest single, “De Pies a Cabeza” which launched in 2016, gave the group an 11th No. 1 on the Latin Airplay chart – a record among bands, and their Latino Power Tour, which was one of the most successful tours of 2016 due to its vast attendance, landed them as finalists for a 2017 Billboard Latin Music Award. To date the group has been recognized with 24 Billboard Latin Music Awards, and is a finalist this year for Latin Pop Songs Artist of the Year, Duo or Group.

Maná’s influence has gone beyond music. Their Selva Negra Foundation (“Black Jungle Foundation”) formed in 1995 finances and supports important projects aimed at protecting the environment. With the support of Mexico’s government, they also have efforts to save the sea turtle by raising 140,000 turtle eggs for release on the country’s Pacific coast. On 2008 the Selva Negra Foundation was named “Champions of Health” by the Pan American Health Organization during an observance of World Health Day. In 2016, Maná was inducted into the Hollywood Walk of Fame.

“Maná have defined Latin rock for three decades, in and out of our charts,” said Leila Cobo, Billboard’s executive director of Latin content and programming. “They’ve also been an example of social conscience and action. It’s an honor to give them our Lifetime Achievement Award.”

Maná will also speak at this year’s Billboard Latin Music Conference in an exclusive “Rock Star Q&A” taking place April 25 where they will speak about their philanthropy and social causes (Billboardlatinconference.com).

The Billboard Latin Music Awards are the only ones to honor the most popular albums, songs and performers in Latin music, as determined by the actual sales, streaming, radio airplay and social data that informs Billboard’s weekly charts during a one-year period from the rankings dated February 4, 2017 through this year’s January 27 charts. Based on album sales, digital track sales, streaming data and monitored radio airplay provided by Nielsen Music and social media data provided by Next Big Sound, Billboard’s rankings are the world’s most authoritative music charts. Finalists, and the eventual winners, reflect performance of new recordings on Billboard’s albums and songs charts, including Top Latin Albums, Hot Latin Songs, Latin Airplay, Latin Streaming Songs and Latin Digital Song Sales chart, among others.
The awards are the culmination of the Billboard Latin Music Conference, which will take place on April 23-26th at The Venetian in Las Vegas, Nevada. Now in its 29th year, the conference is the biggest and longest-running event dedicated to Latin music in the world. The conference is the “must-attend” event for the top power players in the industry including A-list talent and top agents, managers, promoters, marketing, advertising, and radio executives, as well as for those taking their first steps in the business. For information please visit www.BillboardLatinConference.com or email conferences@billboard.com