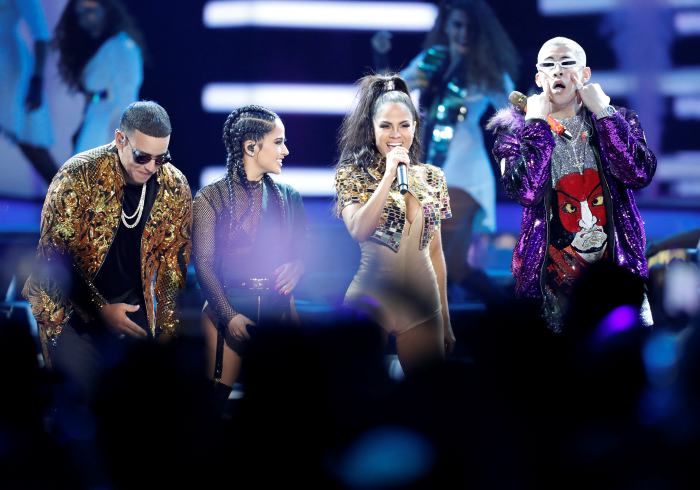 The most prestigious awards show in the Latin music world is celebrating 20 years of uninterrupted broadcast on Telemundo, airing live on Thursday, April 26 at 7pm/6c, starting with the arrival of the stars on the red carpet at the Mandalay Bay Events Center in Las Vegas, Nevada. The show will also air simultaneously on Spanish-language entertainment cable network, Universo. Tickets to the Billboard Latin Music Awards are on sale at AXS.com, Mandalay Bay Resort and Casino box offices or by calling (702) 632-7777.

A finalist for Artist of the Year, New and one of the hottest Latin music acts touring today, Bad Bunny has single-handedly taken Latin trap music to international notoriety. In a short span, Bad Bunny has had 22 charting hits on the Billboard Hot Latin Songs chart, six of which reached top 10, including his featuring on Becky G’ “Mayores.”

With successful film, TV and music projects, Mexican-American multifaceted artist Becky G is set to release her debut studio album this year. The finalist for Hot Latin Songs Artist of the Year, Female recently ruled the Latin Airplay chart with her hit “Mayores,” featuring Bad Bunny. The single was at the top for one week and spent 18 weeks in the top 10. The song also entered the Billboard Hot 100 chart peaking at No. 74. Her song “Can’t Get Enough,” featuring Pitbull, reached No. 2 on the Billboard Latin Airplay chart.

Spanish pop star David Bisbal is a finalist this year for Regional Mexican Song of the Year, alongside Christian Nodal for their collaboration “Probablemente”, which topped the Regional Mexican Airplay chart for four weeks. The singer, songwriter and actor has launched six studio albums to date with five of them reaching the top 10 in the Top Latin Albums chart, including “Sin Mirar Atras,” which debuted at No. 1. Bisbal just released the upbeat summer song “A Partir De Hoy” with Sebastian Yatra, and their music video has already achieved 59M views.

Ready to kick off his “World Tour 2018” throughout 25 cities in the U.S.,Farruko recently released the salsa song “Amarte Duro,” a collaboration with Victor Manuelle. The prolific urban singer and songwriter has placed 19 hits on the Billboard Hot Latin Songs chart, five out of which made top 5, including: “Sunset,” featuring Shaggy & Nicky Jam, which spent 15 weeks in the top 10, and “Chillax,” featuring Ky-Mani Marley, which remained in the top 10 for 30 weeks. On the Top Latin Albums chart, he debuted two at No. 1: “Farruko Presents Los Menores,” leading for two weeks in 2014, and “Visionary,” crowning the tally for one week in 2015.

Following the outstanding success of “Despacito”, 10-time Billboard Latin Music Award finalist, Luis Fonsi, rocked the world with his Demi Lovato collaboration “Echame la culpa,” with more than a billion views on YouTube. Luis Fonsi has racked a total of 31 Billboard Hot Latin Songs entries, seven out of which reached No. 1, including the world smash hit “Despacito”. “No Me Doy Por Vencido” also ruled the list for 19 non-consecutive weeks. Fonsi has placed 11 albums on the Billboard Top Latin Albums chart, three of which debuted at No. 1: “Amor Secreto,” “Palabras del Silencio” and “Tierra Firme.”

One of the most popular Spanish-speaking female urban artists, Natti Natasha, is a finalist for Hot Latin Songs Artist of the Year, Female. The Dominican singer has logged six total entries on the Billboard Hot Latin Songs chart, two of which garnered top 5: “Duty Love” – Don Omar featuring Natti Natasha, peaked to No. 1 in 2012, and “Criminal” with Ozuna, peaked to No. 5 on January of this year. “Duty Love” also led the tally for one week in 2012 on the Billboard Tropical Airplay chart.

Mexican Latin pop trio Reik are finalists this year for Latin Pop Songs Artist of the Year, Duo or Group. They have placed 17 songs on the Billboard Hot Latin Songs chart, three of them achieving top 10, including “Inolvidable,” which peaked to No. 3, “Ya Me Enteré,” which peaked to No. 6, and their latest single “Me Niego,” featuring Ozuna & Wisin. Their album “Des/ Amor” topped the Billboard Top Latin Albums chart for one week in 2016.

Colombian Latin rhythm music sensation Sebastian Yatra is flying high with the success of “A Partir De Hoy”, a collaboration with David Bisbal. The artist has garnered six songs in the Hot Latin Songs chart, and the song “Por Fin Te Encontre,” by Cali y el Dandee featuring Juan Magan and Sebastian Yatra, topped the Tropical Airplay Chart for one week in 2016. Most recently, Sebastian announced “Love”, an upcoming collaboration with Gianluca Vacchi, which was created for the upcoming World Cup.

Celebrating 25 years as a recording artist, Victor Manuelle has released “25/7,” a groundbreaking album with traditional salsa tracks as well as impressive fusions and collaborations. Victor Manuelle has placed 21 albums on the Billboard Top Latin Albums chart, two of which attained No. 1: “Instinto y Deseo,” which debuted at No. 1 in 2016, while “Travesía” led the chart for one week in 2004. His recently released album, “25/7” debuted at No. 1 on the Billboard Tropical Albums chart. He also holds the record for most top 10s on the Billboard Tropical Airplay chart with 56.

Urban music artist Wisin is a four-time finalist this year thanks to his hit “Escapate Conmigo,” which vies for Hot Latin Song of the Year, Hot Latin Song of the Year, Vocal Event and Airplay Song of the Year. He’s also a finalist for Producer of the Year. Singer and songwriter Yandel vies for Latin Rhythm Album of the Year, for his fourth studio album titled “Update,” which debuted at No. 2 on Top Latin Albums, and remained on the chart for 30 weeks. Wisin and Yandel recently announced they are reuniting for the first time in four years with a tour that will bring them to the U.S. at Madison Square Garden on June 8. The duo had 38 charting hits on the Billboard Hot Latin Songs chart, with ten topping the list, including “Algo Me Gusta de Ti,” featuring Christ Brown and T-Pain, which led the list for 14 consecutive weeks. They also had 13 entries on the Billboard Top Latin Albums, out of which five hit No. 1, including the albums “Pa’l Mundo”, “Wisin & Yandel: Los Extraterrestres” and “Líderes,” which became the album with the most weeks atop the Top Latin Albums chart, leading for five nonconsecutive weeks in 2012.

The awards are the culmination of the Billboard Latin Music Conference, which will take place on April 23-26th at The Venetian in Las Vegas, Nevada. Now in its 29th year, the conference is the biggest and longest-running event dedicated to Latin music in the world. The conference is the “must-attend” event for the top power players in the industry including A-list talent and top agents, managers, promoters, marketing, advertising, and radio executives, as well as for those taking their first steps in the business. For information please visit www.BillboardLatinConference.com or emailconferences@billboard.com